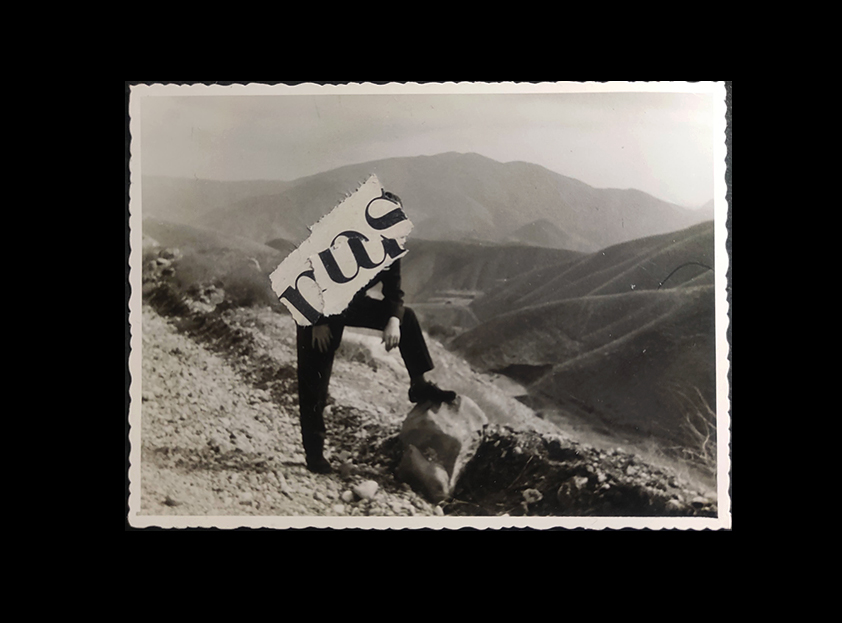 The characters that appear in each photograph, those that are veiled behind some element other than themselves, may have something similar to who they were, or perhaps not. I don't know who they are, I don't know anything about their life and I'm not particularly interested either. I do not travel memory, nor nostalgia, I do not want to evoke anything, nor do I refer to any historical content. My collages do not want to be categorical, or close the meaning, there is no single story, much less univocal.

What there is is what Ramón Gómez de la Serna asked in his Goyerías: “What should have already been invented,” he wrote, “was the circulating library of souls, giving a means of varying the soul from time to time to all those who have a monotonous or uninteresting soul ”. Because in the photographs that have come to my work table these past years there are souls of all kinds. There are bottled souls and non-bottled souls, there are fluffy souls, parched souls and Lorraine souls; idiosicratic souls, cork souls, glitter souls, and clay souls. Cellophane souls, gray, flat souls, bloated souls and bubbling souls, there are tormented ones and there are brave ones. And there are also “… souls like a button box where buttons from different fathers and different mothers have fallen”.

What I like about each photograph I enhance, I try to hide ugliness, what bothers me visually I camouflage it or enrich the photo by veiling it, I make it disappear. In a way what I do consists of creating a dialogue between different materials, I cover, hidden, I put forms that were not even known to talk. Textures, surface finishes, hidden types, commercial information, reverse. After casual encounters, which are not fortuitous, in many afternoons and days of work at my table I reinvent hidden senses, I open up poetics and possibilities. I inhabit polysemy. I make each photograph change its soul. Subtleties, brightness, patterns, textures, surfaces. Materials that I read as consistent with the image, with that person who inhabits photography and whose soul I want to change. Each image requires deep attention and careful listening. Everything forgotten, what is always seen and ignored, what is left out of the foreground is what makes up the alchemy of that new soul that will come out of my laboratory-table.

A mature woman, with an uninteresting soul, who temporarily borrows from my table, in my library of souls. A nondescript child becomes a geometrist; a woman wears a cellophane for glasses, "positive retouch" glasses, glasses with a pink filter, with a blue filter, with an orange filter. To look different is to be another. Nineteenth-century galactic and pop. Mix times. I kiss a photo, I put the broken glass of a mobile screen, a veil, a Japanese paper, some discarded circles from a die-cutter. Rhythms, dances of shapes, a mustache that marks the curve of the monocle without glass, to see the world for the first time with a spiral gaze. The spiral jumps to another place, becomes the tangled head of a parent holding a child, and the tangle clears up on the crochet hook. The weave of the crochet becomes a cell, a honeycomb, a geometric and perfect house of some wasps that could also be the face of another lady as nondescript as the first one, like the others, like almost all of them. Masks, glitters, springs.

You flourish; spring will always come.