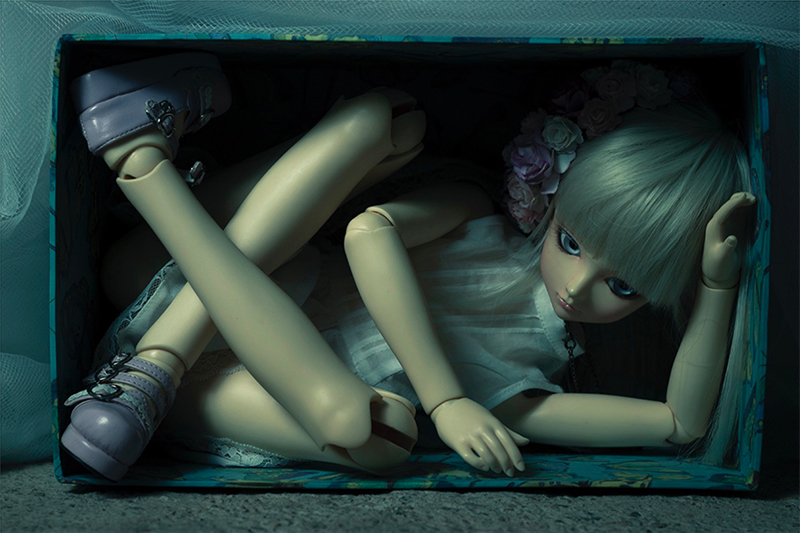 “Marioneta” is a work that talks about gender violence from a personal point of view, thanks to which I was able to overcome the experience. Drawing on work like that of Jo Spence, who used photography as therapy during the recovery process from breast cancer, I started this work so that I could talk about what I couldn't talk about.

Jo Spence pioneered the use of photography as therapy in 1986, and it has continued to be used since then as a process of self-discovery or self-exploration. Use the camera to create artistic images that have a therapeutic effect, since they allow expressing emotions and investigating problems.

An important part, for me, was working with my own identity. Because during a sexist violence relationship you lose parts of yourself and end up not recognizing yourself. It was important for me to recognize myself in those images and that they allowed me to recover my lost identity. I think I didn't manage to recover the person that I was, because that is something that cannot be done, but it does strengthen the foundations of the person that I have become now.

In addition to that, I considered that it was a topic that had to be discussed, because despite being a problem in our society (60 women were murdered in 2015), it remains a taboo subject that is not discussed. An issue around which there are many prejudices and prejudices that  always fall on the side of  women, because  the idea  still persists that if they mistreat you it's because you looked for it or because you deserve it. And because ,this is something that happens to other women, an idea to which the media contributes greatly.

My photographs are scenes, using dolls,  all those scenes that I had in my head. During the relationship I felt many times that I was living it from the outside, that it was something that couldn't be happening to me, so I keep very clear images of those moments, images that I have been able to capture in the photographs.

The use of dolls was important to me. First, because it is an articulated doll, a lifeless object that you can manipulate at will and represents very well what a woman becomes in the hands of an abuser, he is the one who pulls the strings and you are not the owner of your own life.

The second reason is because it was the only thing that he couldn't take  away from me, from what my life was before I met him, they are strongly linked to my identity, my tastes and my hobbies and, although he tried to get rid of them, he did not succeed. And I feel that thanks to them I did not manage to lose myself completely.

Two of my dolls appear in these photographs, although it is difficult for someone who does not know this hobby well to see that they are two different dolls. Both dolls represent me in this self-portrait through objects. The first doll is the person I was before him, the second Is what I became.  Because if there is something that women who have suffered sexist violence have in common, it's the feeling of guilt that we carry. Guilt because you think that if this is happening to you, maybe it's because you deserve it, guilt for not having been able to stop it before, guilt because if you don't get the relationship to work it's because you are not a complete woman.

With all these ideas I produced a series of 14 pieces in which I reflected the experiences that I lived  and this, not only helped me to be able to speak about the subject with normality, but I also think I can contribute to  give visibility to this problem, because the day when we can stop talking about this problem  because it's disappeared is still far away.

Isabel Ramírez Torres was an outstanding student and is currently a teacher at the International School of Photography, Espai d'art fotogràfic de Valencia, which collaborates with the Ojos Rojos Festival.