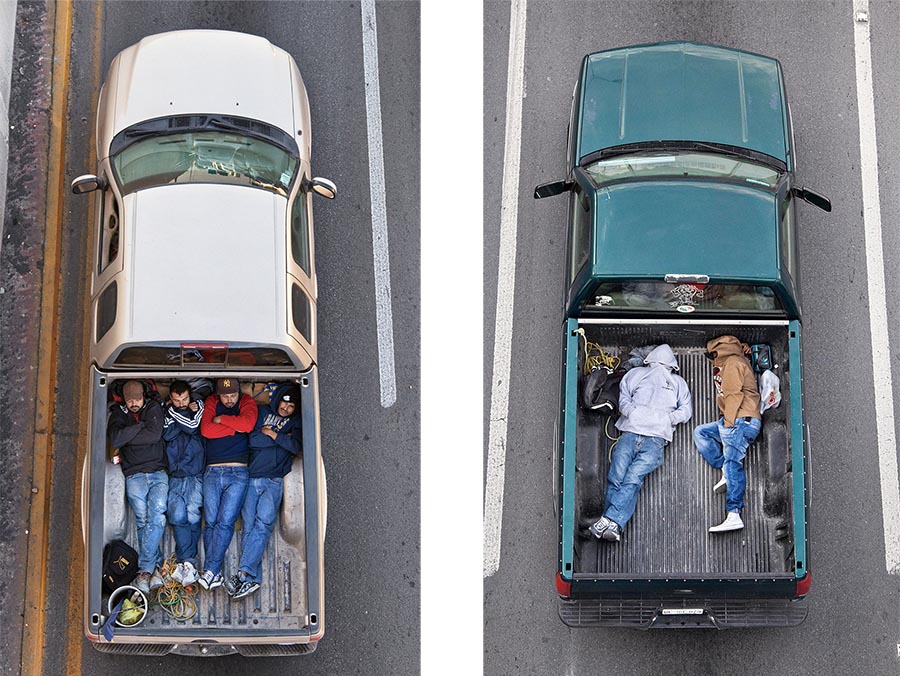 Car Poolers according to the Wordref Dictionary is "a group of people who come together for commutes to and from work, in the same car or alternating between each member's car shifts." For me, the project not only visualizes this practice but also functions as a continuation of my visual exploration on the subject of suburban growth in Mexican cities and its ecological, political, economic and social impact on the rest of the city's fabric. Six years ago I began a documentation of the metropolitan area of ​​Monterrey and how it was in an accelerated expansion due to new impulses to social housing programs sponsored by the State and Federal governments.

Annually, since 2005, approximately 40 thousand houses have been built in the 9 cities that make up the Monterrey metropolitan area in northeastern Mexico. Without any guidelines of a metropolitan plan, these cities have grown in an apparent senselessness and lack of regulation. As a consequence, the urban infrastructure that could dampen such growth has been exceeded, leaving the more than 4 million inhabitants between vehicular chaos, long and costly transfers, insecurity and a devastating drug war.

Monterrey has historically been an industrial city and considered one of the most economically healthy cities in Latin America. Today it is one of the most dangerous cities in Mexico. In its different facets, my photographic research has sought to make visible a series of structures in said "development". I am interested in making visible situations that oscillate from the official discourse that "everything is fine, we are making progress." It is in that sense that Car Poolers presents an opportunity to tell an alternative story to what progress means in the third world.

What do we have to sacrifice as citizens to be able to maintain our house on the outskirts of the cities? What risks must we bear to keep our jobs? These and others are questions that I asked myself at the end of my Suburbia Mexicana project and that with Car Poolers I have managed to make possible answers visible. While doing a visual investigation for the Colegio de la Frontera on the different uses of the street in the city of Monterrey, I had the opportunity to rediscover these workers traveling in this way.

In a short time it seemed relevant to me to return again and again to capture a large number of these "car poolers". After a year of going once or twice a week, from 7am to 9am to capture the moving trucks on Avenida 85 south of Monterrey, I have taken more than 60 photographs that seem to me to present the subject in a correct way. I am still fascinated with all the things that the images contribute or comment on the world in which we live from the Mexican society and its urban social practices. The work is also a demonstration of convenience and solidarity. It is an act that demonstrates the resilience of the human being and his ability to cope with everything. These images, of an intimate practice carried out in a public space, are finally a reflection on the working conditions of many Mexicans and their invisibility in a society in crisis.

Alejandro Cartagena was born in Santo Domingo, Dominican Republic. He has lived and worked in Monterrey Mexico since 1990. His work focuses on photography and the different ways in which images shape the way of understanding urban and social space. His works are in public and private collections such as the SFMOMA in San Francisco. , J. Paul Getty Museum in Los Angeles, the MFAH Museum in Houston, the MOCP in Chicago, the JPMorgan Chase Art Collection, the MAM Museum in Rio de Janeiro, the George Eastman Museum Collection, the West Collection, the Coppel Collection, the FEMSA Collection, among others. He has published a series of books such as We love our Employees, Gato Negro, 2019, Los Sumergido, self-published, 2019, Santa Barbara Shame on US, Skinnerboox, 2017, A Guide to Infrastructure and Corruption, The VelvetCell, 2017, A small make believe neighborhood, VSW, Rochester NY, 2017, Ríos de Poder, Newwer, 2016, Carpoolers 2nd ed, Self-published 2016, Santa Barbara return Jobs to US, Skinnerboox, 2016, Before the War, self-published, 2015, Mexico, Carpoolers, self-published with support from FONCA , 2014, Suburbia Mexicana, Daylight Community Arts Foundation / Photolucida 2010, USA, among others.